Linking up with Dwija over at House Unseen for an end of the year photo review.  So here's 12 pictures from 2014...

January
Soccer Boy's birthday is in early January.  This year we were trapped in the house for the celebration due to a bad ice storm blowing through the area.  (It would not be the last winter storm in 2014).  I did a Paleo Whole30 eating plan this month and lost 30 lbs. in the process.  We also had some repair issues, with the computer, washing machine and van all breaking down at the same time.  Home ownership for the win!!

February
We spent most of this month inside the house.  It was bitterly cold outside, the kids could only go out and play in the stuff for minutes at a time.  The amount of time it takes to get the little ones bundled up in their snowsuits, boots and gloves is more than the actual time spent in the snow!  The area schools were on constant snow days, which made my homeschool kids insanely jealous.  Due to being under house arrest we did end up getting lots of homework done.  The rest of the neighborhood went to school until June.

March
March starts our family birthday season, with four landing in this month, including mine.  I hit a milestone as this is the year I turned 40!  (Princess just told me I "look like a teenager" in the above picture, how sweet)!  Basically it's all cake and parties every weekend.  The cold weather started to thaw this month as we traded snow storms for tornado warnings.

April
This Easter we had one with a stomach bug so we had to skip the extended family parties.  It's also Firstborn's birthday month and I finally managed to get his birth story posted.  I also did a post about my miscarriage, with 2014 being the ten year anniversary of our baby's heavenly birthday.  Soccer Boy also played on a spring soccer team, with Doug as his coach.

May
Finally, some great weather!  Lots of pictures, we spent some weekends out in the country visiting our folks.  Mother's Day, Memorial Day and Eighth Grade Graduation (where we all managed to dress up and arrive on time).  We started a bathroom remodel (which is still in process) and God used the time to teach me about JOY.  I was bored while waiting for Jen's book to arrive, so I did a post about sex.  The pool opened at the end of the month which led to...

June
The entire month seemed to be dominated by Soccer Boy's swim team schedule.  Daily practice and two late night swim meets each week, which requires one adult (me) to work each meet.  It was a cool month, weather wise, and we had a few meets in the rain (if it wasn't storming) or rain delays.  It was a great learning experience for Soccer Boy, he enjoyed the process and did well for his first year on the team.  This does not surprise me, as physical stuff always comes second nature to him.

July
Lots of swimming and summertime fun.  Princess and Game Boy got to be in our hometown parade with their Dad.  The older boys went to a fishing church camp for a week.  Soccer Boy competed in the Midwest Swim Conference.  The entire family had a round of influenza that threw me for a loop.

August
We spent the month enjoying the end of summer.  We headed to the pool almost daily, with the younger kids learning to swim and the older ones doing flips off the diving board.  Our homeschool year started near the end of the month, and I did a post about how I homeschool.  Ironically, this is also the first year Princess is attending the local public school.

September
We attended my niece's 3rd birthday party, which was at a park with a petting zoo.  Our Trail Life troop had their beginning of year Trail Roundup ceremony, in which the older boys were awarded their staffs.  This is also the year Firstborn crossed over to the Adventures group.  I was on a blogging break during all of this, so no posts to link.

October
This was a busy month!  We did our family pictures out at Doug's folks' farm.  There were field trips and pumpkin picking and Halloween.  We also spent a weekend in Peoria with Doug's brother and his family.  Our niece had a part in Shrek the Musical so we attended one of her performances (which was really good).  Amazingly, Doug and I sat with our five kids plus two cousins for the play and they all did well.

November
Princess was in a Madrigal Dinner Theatre performance, which technically was in December.  I'm putting it under November because that is when all the practices took place.  Lots of mommy and daughter time as I went with her to all the practices.  She also came down with Flu A right before Thanksgiving and missed a week of school.  We spent the holidays with my in-laws, my parents were vacationing in Florida.

December
We celebrated our 16th wedding anniversary this month.  I sang with the choir for Christmas Eve Midnight Mass (technically 10:00 p.m. for my church).  Princess came down with pneumonia and we spent Christmas morning in the hospital, causing me to reflect on the meaning of the holiday season.  Doug, Toddler Boy and I are now sick ourselves and spending this week recuperating at home.

Doug and I still managed to make our big turkey meal on Monday that we missed on Christmas day so we've been eating leftovers all week.  We picked up Princess a new bed yesterday and we're almost finished remodeling her bedroom.  Tonight our family will be watching movies and eating Smokey Bones nachoes as the kids attempt to stay up until midnight to ring in the new year at our house.  Happy New Year!!
Posted by Amy @ Consecrated Housewife at 8:59 AM No comments:

When Christmas Doesn't Go as Planned

We had a little "detour" in our Christmas celebration this year...

She had caught what appeared to be a cold and slight cough last Wednesday.  Sunday night it took a turn for the worse with her starting to run a fever and up most of that night coughing so bad she had a hard time catching her breath.  We took her to the doctor Monday, who sent her home on antibiotics.  Still no sleep Monday night and by Tuesday her fever was spiking 105.  I'm not sure I've ever had a kid run that high, we actually took it three times to verify it was right.  Called the doctor to get some steroids to help her breathing.  By 2:00 a.m. Christmas morning she was running over 104 and starting to wheeze in-between coughing fits.  It was time to take her in to the children's hospital.  Tests and x-rays confirmed pneumonia with a double viral infection, including RSV.  They were able to get her fever down and her wheezing under control and her oxygen levels looked good.  We headed home later that morning with a script for a nebulizer to help her breathing.

As of tonight it appears she is finally on the mend.  We've only had to give her ibuprofen once today for fever, considering she's been on it almost non-stop since Sunday that's improvement.  We've not had a solid night's sleep since last Saturday.  Christmas night she needed two breathing treatments to get her through and she needed one this morning... 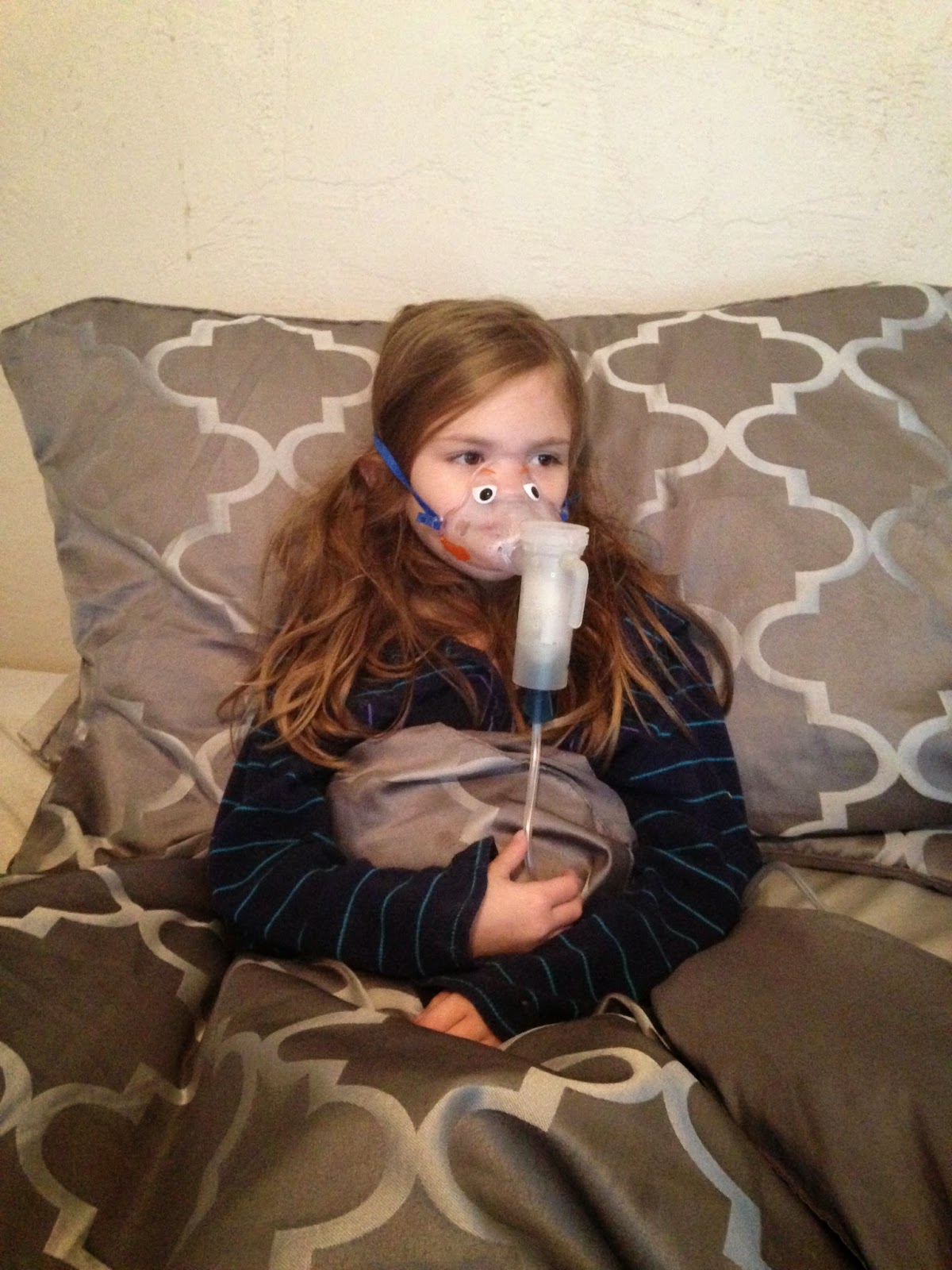 I'm praying tonight is better.  (It was, she finally was able to sleep through the night, praise God)!

We had plans to celebrate Christmas with family but Princess was too sick to even consider attending.  We had plans to attend Christmas Eve services at our Protestant church but those had to be laid aside too.  I had last minute gifts to purchase but I was needed at home.  We were supposed to attend Doug's office family party but only the older kids went with Dad this year.  The lack of sleep has been such a contributing factor.  I become a different person when exhaustion starts creeping in, and I don't like it.  Doug and I have struggled to take turns and give each other grace in the moments but nothing really makes it easier to bear.  This was not the holiday I was envisioning just a few short weeks ago.

My friends and I joke that the Christmas season was much more fun when we were kids.  As an adult, it just seems like so much work.  Parties to plan, gifts to make (or purchase) and wrap, trees to decorate, cookie baking and holiday meal planning.  All the phone calls and coordinating for the different holiday events.  It seems I need a vacation!

Princess' illness has forced the entire family to slow down, and with it comes the reminder that Christmas isn't about all of the above.  It's really not about the parties, presents and the perfectly decorated tree.  Christmas is about Him.  It's only about Him.  He came to us when we weren't perfect (when we were so, so far from perfect).  Every year, we can work on preparing for Him through the Advent season, but we can never do it perfectly.  And He comes to us anyway.  His coming never depended on our readiness, thank God!  It only ever depended on His love for us, which is perfect and knows no bounds.  His birth was the only ever truly perfect Christmas gift, we are blessed!

I received an email yesterday from our Protestant church, it read "only 364 days until Christmas".  I had to smile at that when I thought I get to celebrate the Christmas season for another 12 days, until the Feast of the Epiphany on Jan. 6th.  Some churches celebrate Christmas for 40 days, until the Feast of the Presentation of the Lord.  My Catholic church will have a Christmas tree up and we will be singing Christmas songs for the next two weeks.  My thoughts on the 12 days of Christmas.

I'm very thankful that my daughter is on the mend and hope to apply all the lessons God has taught me this Christmas to future holidays.  I am hoping to do a post about some of those lessons when I've had a bit more chance to reflect and catch up on some sleep!  Wishing your families a blessed Christmas and a Happy New Year!
Posted by Amy @ Consecrated Housewife at 11:27 AM No comments: