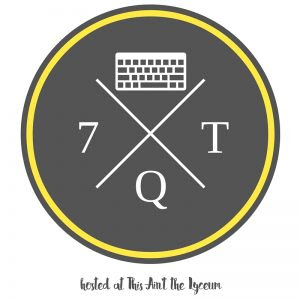 1.  Advent is here!  Which means Christmas is around the corner, so I'm trying to stay ahead of the craziness.  I don't have our holiday letter done or the Christmas cards made out yet.  A bit behind because there have been years that was done before Thanksgiving...BUT I do have some of my gifts purchased.  So that's something.  Also, the tree made it up the weekend after Thanksgiving.  Having some technical problems...

We have one of those light strings that change from colored to white (on a separate circuit).  So when I plug the top "white light" only set into it they will only turn on if the colored button is switched.  I seem to recall having this issue before but can't quite remember how it was resolved.  I had to put the tree together twice this year.  I'll blame it on the younger kids because this is the first year I let them help with that part and we missed the very bottom row...which meant we had to take it completely apart and start over.  Maybe I should consider a real tree next year?

I went out and purchased a new tree topper since our angel one is not working.  Actually I lost misplaced the plug in adapter (details, details).  Considering moving the tree out of the window and to the corner.  I like the idea of the tree in front of the window but realistically our living room flows better if it is in the corner.

2.  I know, I know, it's Advent.  Catholics everywhere are groaning.  However, I was raised Protestant so I have no issues with putting a tree up before Christmas.  If the tree doesn't make it up after Thanksgiving it sometimes doesn't get done until right before December 25th (I understand that is the tradition in some families but it's just too late for me).  I am really enjoying all the Christmas music on the radio and the choir will soon start practicing the songs for the upcoming season.  Those songs are some of my all time favorite to play on the piano too.  I miss playing on a regular basis.  Maybe I should take lessons again (Christmas present to me).

3.  I'm reading Heidi Hess Saxton's new book Advent with Saint Teresa of Calcutta for my devotions.  I'm only a few days in, obviously, but liking it so far.

Speaking of books, we just finished The Adventures of Tom Sawyer during our Read Aloud time in the homeschool.  I finally started including the Read Aloud in our morning routine and it has really made a difference.  We've been doing Read Aloud time for years but I always had it on the schedule after lunch.  Frequently something would come up and we wouldn't get it in, which meant we couldn't get through as many books as I would have liked.  This year I moved it to our morning routine and that has worked out much, much better.  We just started The Best Christmas Pageant Ever, which is a shorter story so we'll be able to finish it before we break for the holiday.  I was considering doing Watership Down next but I think it is too long for Read Aloud.  If we do something with too many chapters the boys start losing interest before it's finished.

I'm sure most of my readers know all about this, but if not Sarah over at Read Aloud Revival has a great website with reading lists and lots of information.

4.  We are preparing to do a major kitchen renovation after the holidays.  The plan is to relocate the kitchen upstairs (it is currently downstairs).  It was originally upstairs when the house was built but the previous owners moved it.  Since we're doing a lot of the work ourselves it will be a major job but at least I won't be without a kitchen while we're in the process.  Years ago we did some work on our current kitchen which meant we were unable to use it for a few weeks (which felt like a month).  There was drywall dust everywhere.  I love the finished product but really hate the process.  Just watching Fixer Upper stresses me out.

5.  Did lots and lots of baking over Thanksgiving, my family rejoiced!  We still have two turkeys in our freezer.  I had some help with the pumpkin pies...

I ended up with white hand prints all over the cabinet and flour on the floor (how did that happen)?  I should have had my dear hubby do clean up because Princess came into the kitchen and told me "Dad said we should come down and help you make the pies".  So he could watch Netflix in peace (priorities).  But they are cute helpers so all is forgiven.

6.  I volunteered in our youngest's kindergarten class, the theme this week was The Gingerbread Man.  They made gingerbread houses...
7.  Whipped up a batch of my oldest son's favorite holiday treat... 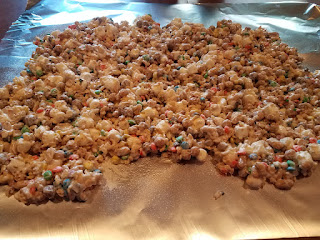 We'll be going to our friend's Christmas open house this weekend and the recipe is courtesy of her.  You can find it and more on Rhonda's website Christmas Notebook.  I know I've mentioned her before, she teaches a class every year through a yahoo group on how to prepare for the Christmas holiday.  The class starts Aug. 1 but you must join the group Feb - July.  She taught me how to set up my own Christmas notebook back when Firstborn was a baby and I continue to use it to this day to plan my holidays.

Mix together the marshmallows, cereals, and nuts in a large bowl.  Melt the almond bark in the microwave at 50% power for about 3 minutes.  You'll need to check it with a fork and stir it because almond bark holds it's shape when melted.  Pour the melted almond bark over the cereal and mix (work quickly) then add the M&M's last and stir until just mixed.

Spread out flat on two pieces of aluminum foil to harden then break apart and eat or dump in a plastic bag to save for later.  Yum!!

Because the trailer for the upcoming movie The Shack came out this week!  Super excited to see it in March.  I would rate this book as one of my top 10 books of all time.  One of those books you can come back to and reread and discover more there than the first time you read it.  There's a lot of depth to it.  Caution, the story, in part, revolves around an abducted child so it is not an easy read.  But it is very good.  I would argue that the book has to take you into the depths of the characters' pain in order to reveal truths about God and in part answer the question "why does God allow suffering in the world".  It's about forgiveness and redemption.  The book was written with the screenplay in mind, I can't wait to see how God will use it to transform people's hearts.  Here's the trailer...

Enjoy your weekend!!  Much thanks, as always, to Kelly @ This Ain't the Lyceum for hosting.  Click over to check out more 7 Quick Takes.
Posted by Amy @ Consecrated Housewife at 4:53 PM No comments: